Support teams who are looking for a cost-effective, intuitive, cloud-based call center solution.

Easy to set up, easy to use. Affordable, feature-packed, cloud-based. Dialpad's call center software improves customer experience and agent effectiveness, resulting in better conversations. Monitor and coach agents from anywhere with robust analytics dashboards. Automate tasks and capture insights to save time. Improve CSAT, FCR, close tickets, and keep your customers happy. Use real time recommendations to boost agent confidence and give them answers they need to help customers in the moment. 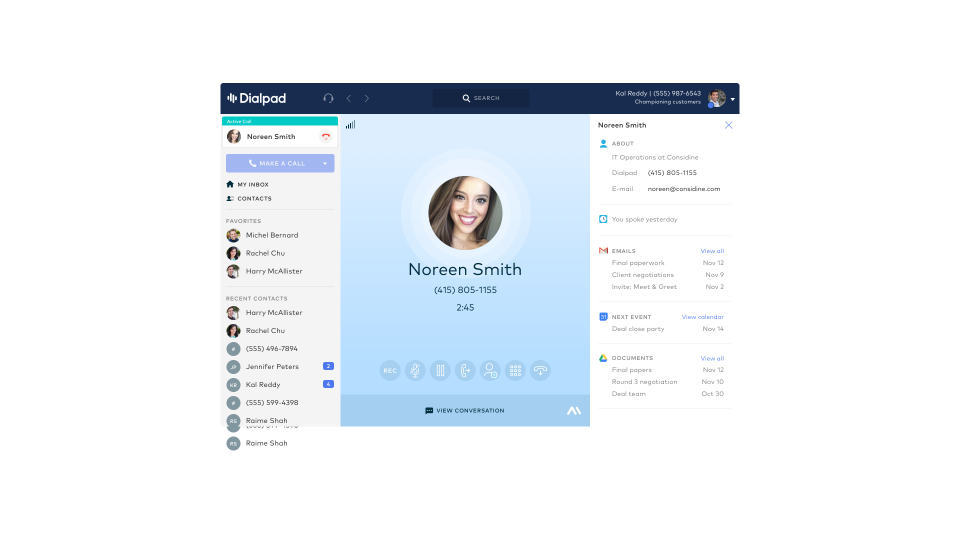 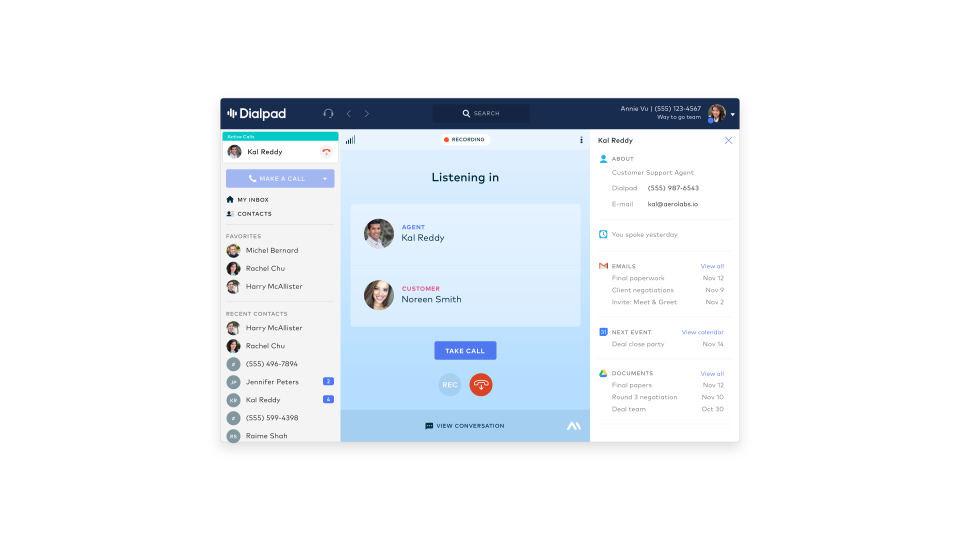 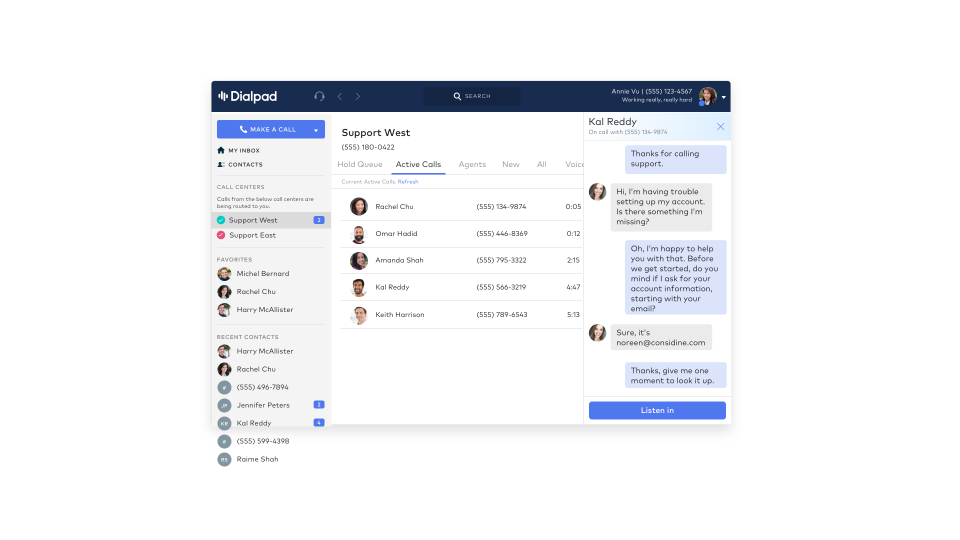 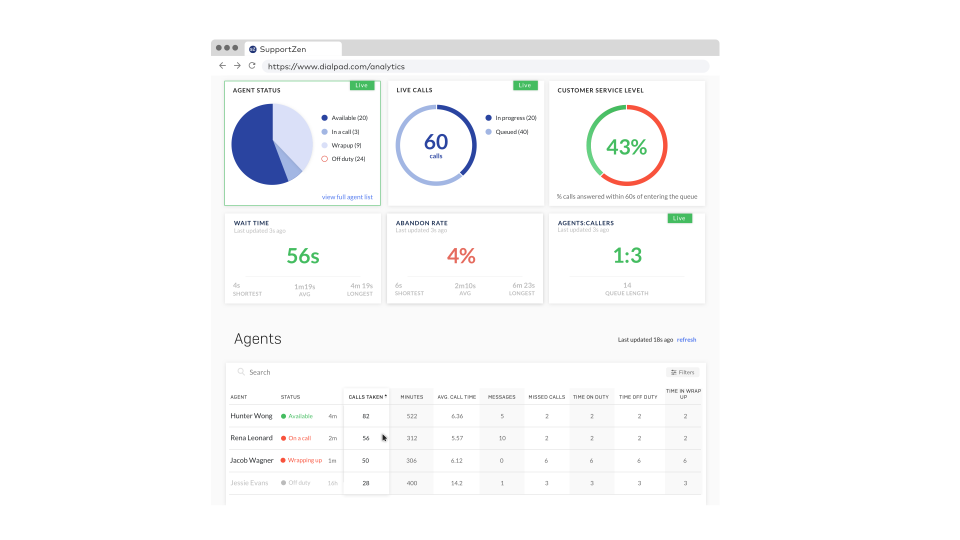 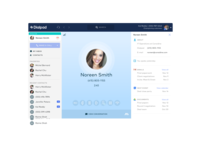 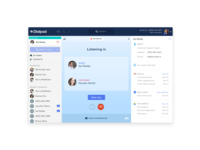 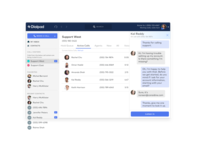 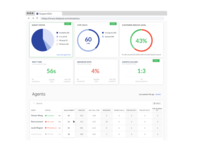 Comments: Dialpad's AI transcription service makes it easy to follow up on calls without writing notes. It automatically locates todo actions and positive/negative sentiments and makes it incredibly easy to stay on top of all your office communications.

Pros: Dialpad truly has two distinguishing features that make it better than all other competitors: 1. Design. Dialpad's intuitive user interface across all its platforms far exceeds the clunky, outdated interfaces of its closest competitors. Having a similar, yet distinguished interface helps differentiate it from your regular phone app on your phone while retaining similar functionality to ease the learning curve. 2. Seamless integration. Dialpad makes it easy to switch calls between your devices. For example, if I take or make a call on my Mac, I can easily move it onto my cell phone if I need to move locations. Other competitors typically have an iPhone app. While some have apps on other platforms, we have found them buggy, and for some, unusable. There are a number of other features, such as its AI transcription, but these are probably the two most important features for a phone system. Simply put, our team has never had a single complaint about Dialpad, which is exactly what you would hope for in an infrastructure component like Dialpad.

Cons: There isn't anything that I dislike about Dialpad. It has been a perfect solution for our office phone system.

"Effective and helpful VOIP system with some quirks "

Comments: I am pleased but want more reliability.

Pros: This VOIP platform continues to grow better and offer more features and allows me to access my calls and clients on my cell phone and computer.

Cons: It was having issues on older Android phone and would switch to my personal voicemail. Also I was given 2 numbers and can't seem to control which one I send texts to customers always.

Comments: As primary business phone line, Dialpad fits the bill. I can make and receive calls for my business on my personal phone without revealing my personal number, and I can maintain a minimalist customer list. As a mobile-only (not an enterprise) user, there’s a lot that the app can do which I don’t need. Dialpad appears to have capabilities that can support my business growth (additional users and physical locations), but I’ll be wary of whether their inconsistent iOS interface is an indication of spotty development overall.

Pros: Note: Dialpad offered gift certificates to reviewers. I think that’s shady. But I have used the app 2+ years.
Best: I am a sole proprietor (single user) & love that this app gives me a business phone number that rings to my personal device. That’s genius, a good value, and worth all interface hassles. Also, support has improved a lot. I get timely, thorough responses to issues: there’s a star-rating requested every outgoing call, and when I have reported issues (rare, such as one-way audio), they’ve sent detailed analysis explaining what happened. At least one bug I reported (an issue where the keyboard covered most of the comment field on a feedback window, with no scrolling) has recently been fixed.

Cons: Dialpad scores terribly on its interface and on interoperability with other apps. The contacts-search function won’t access iOS Contacts (even with access granted in Settings): type a name in search, and it will sit & spin all day. It doesn’t even time out. The app provides a skeleton contacts function (name, phone numbers, emails, company, and title—that’s it), so I lose a lot of functionality that’s essential for a communications app. Similar fail when sharing a picture from Photos: tap Share, select Dialpad, and the app will open to the eternal spinner (yet the app will acceess Camera and Photos the other way around). Also, unlike iOS Messages, when I start a text in Dialpad and need switch screens or apps, the draft text goes away. Lost time & effort. These issues are all long term, so clearly, the development team just has not prioritized basic functionality in their phone app.

Comments: Not the best, but they are ok for anyone starting a business who needs a business number.

Pros: -Good technology
-Different Options for their prices
-Somehow affordable compared with others

Cons: -Can become expensive if you need more than 1-2 Person to answer calls
-Customer support can easily make your life hell
-It took me more than 6 months to be able to transfer my number out
-They can be very misleading and reject your transfer out requests even after you follow their strict procedures

"Dial Pad Versus Other Phone System"

Comments: My experience was great, basically it does the job we need so I am satisfied with that. But to be more advanced, the system needs more improvement and I hope they could make it more user-friendly​.

Pros: If you are looking for a ​cheaper phone service, that does the job of catering your customer's, this might be the one for you. Way cheaper than Ring Central and The Customer​ Service is Up top, but SOMETIMES not so easy to get in touch with especially​ on weekends. However, I highly recommend​ their service as they are very fair to their users, For instance, when we were still getting used to the system,​ we have 4 phone lines that were reserved and we weren't aware that it was being billed, but the customer service steeped in and refunded the cost of the unused lines RIGHT AWAY, they are easy to negotiate with.

Cons: The Software is basic, but not that very user-friendly compared to ring central. We've been using Ring Central for a few years before we shifted to Dial Pad.
Recordings are not easily located, when you try searching the phone number on the call logs, it will just give you the activity and the only way for you to turn on the recording is to manually​ turn it on while on a phone call, there must be some other ways, but for people who are not so techy and just wanted to use the phone service solely, it would be quiet a challenge figuring how to set this in automatic mode. Dial Pad also Offers Transcription, this means that all Voicemails left on your phone numbers we're automatically transcribed, however,​ it is not accurate but it does the job.
Integrations with dialpad to your customized database​MIGHT be possible​ but at a higher cost and you may need to get a quote with their Sales Department.